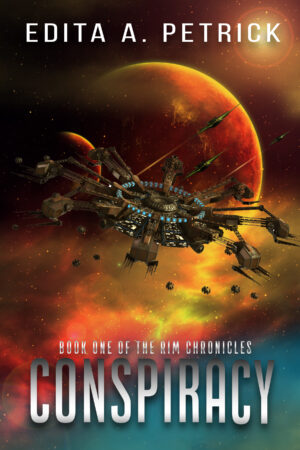 CONSPIRACY
Book One of the Rim Chronicles

When the signature has the power to start a galactic war….

Parv Zarinth learned early in life that if he wanted to defy his father, he’d have to do it from somewhere half-way across the galaxy. He does his best on Hettamir to represent his father’s interests. He steers away from any conflict that may threaten the family business which translates into galactic empire.

Hettamir is a world with no other than hospitality industry. It’s a pleasure to do business on Hettamir, in every sense of the word. And Parv has been mixing business with pleasure for five years now, flying under the radar of his tyrannical father. The business is to expand his father’s business empire. The pleasure has a name: Arun Dyem. She is as beautiful as she is crafty, having risen from the ranks of sex industry to lead her people in a ‘velvet’ revolt.

As the champion of her people’s rights and freedom, she is relentless in lobbying the Galactic Confederation for a treaty that will bring Hettamir protection. It is the last thing the warlords of New Hebrides want.

Parv watches the preparations for the grand event, even as he tries to shake off the feeling that something…or everything is going to go wrong. He finally has what he’s always wanted—a woman he loves and means to keep. She is his whole life, his destiny. And he will fight to his last breath to hold on to his future….