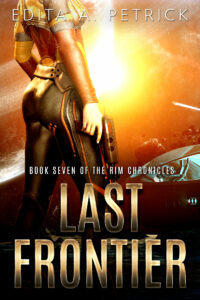 The Confederation Alliance of Planets and Star Systems has celebrated its twelfth millennium anniversary. In all those centuries there have been countless skirmishes and incidents with their greatest adversary, the Shoultain Warlords–but never an outright war.

However, there are factions within the Federation that believe that the dark event is much overdue.

Kitaya has finally persuaded Karin to go after a starship posting; especially since it’s offered to both of them by the man who shares a difficult history with them, Captain Gallen DeWynter. He’s the one who saw Kitaya in the Synoor jungle, when still an ensign on his first assignment. He’s also the one she holds responsible for the death of her childhood friend. Karin is neither comfortable nor happy about serving on a starship but she’s a good friend. She’ll do anything to help Kitaya figure out what she wants out of life–and with whom to spend it. She’ll keep her secrets, dark and darker, and all she wants in return is for a starship to move fast across the quadrant–anywhere but near the ship where the man who makes her supremely uncomfortable by merely smiling, serves as the Chief of Security for the President of the Federation.

The Shoultain Warlords are a marine humanoid race who have been experimenting on captured humans for centuries. They are learning to understand their ‘enemy’ from a molecular level up. It’s precisely what the science faction of the Federation champions as the next phase of studying their enemy. However, for experiments to yield useful data, a crowd of subjects is needed.

That’s where the Federation’s latest prototype starship, the USG Trevor Meridian, can make a difference. It’s under the command of Captain Gallen DeWynter. It’s where Kitaya serves as the second navigator. It’s where Doctor Karin Vexley is the Chief Medical Officer. And neither of them believes that the latest set of orders the ship’s captain received are legitimate. After all, the Federation’s constitution prohibits torture of enemy prisoners but that’s precisely what those who engineered this mission are after–capture, torture and execution.