To an enemy with an impressive lifespan, one failed campaign is not an obstacle. It is a challenge.

It took millennia for Earth to join the galactic community. Some thought the long wait was worth it. Some thought…otherwise. And while the Earth did get to wear a name-tag of  “Core” world, the title was more ornamental than functional. After all, the Confederation Alliance of Planets and Star Systems was already six-thousand years old when Earth finally climbed on board.

To Karin, Shakespeare’s plays are classics, twelve-thousand years old. To Kitaya, the Rimworlder with Caritan roots, they’re incomprehensible collection of metaphors. To Alvin, the prototype AI who runs the STRATTON Space Post, they’re simply an infrequently retrieved data collection he stores in his vast memory. Karin has spent her life being youngest and the best at everything. Then again, she’s barely out of her teens. Kitaya is equally brilliant but has to hide it because she’s a telepath with extraordinary abilities. Something brought the two together on a distant frontier post, when they were thirteen. It could have been fate, or it could have been the Mistress of the mysterious tribe of frontier gods who have been hiding on the galactic rim. Individuals with even marginal telepathic ability are barred from serving in the Fleet. But that’s precisely what Kitaya wants—to be a pilot, and drive a starship. Karin helps her to get the first field assignment but once that tour of duty is carried out, she knows it’s time to hide—for both of them. The Stratton Post is a glorified trading post that lies in a narrow stellar corridor. It’s run by Fleet personnel which makes it a perfect hiding place for Karin and Kitaya. It’s not a starship, but it is a Fleet installation. Service on Stratton Post is entry-level but it qualifies as Fleet service.

They barely settle down to figure out their next step, when a shocking news rocks Stratton. Twenty-six years ago, the Allied President and his entourage of galactic movers and shakers, had tried to sign a treaty with a world that was slowly being swallowed by the pirates and warlords of New Hebrides. That attempt ended in horrendous tragedy. It seems that the Federation wants to try again to do what they failed to accomplish, in such spectacular fashion—sign the hugely significant treaty on a totally insignificant space post, Stratton. Once again the conditions are just right…for those who want to see this event succeed and for those who want to see it fail. 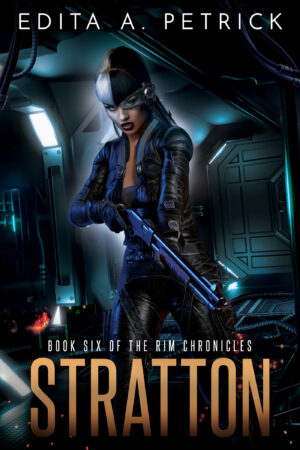