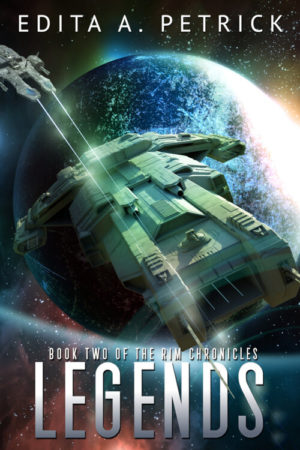 Daniel DeWynter is unlike any of the arrogant, brash DeWynter star-lords carving the galaxy with their glory. Perhaps because sixteen years ago, he witnessed first-hand, treachery and betrayal that saw thousands of innocent lives perish in the explosion of the Lynwarren Trading Station, he tends to look at any situation with humanitarian eyes. He is a soldier, just as his family traditions dictate, but he can also fill the role of a diplomat. As such he has the skill to assess a situation well before he walks into it. When his formidable star-warrior mother, Admiral DeWynter, sends him on a mission to the Rimworlds, he’s asked to be neither. What he is asked, makes him uncomfortable—and fills him with a strange sense of foreboding.

A frontier world like Synoor sees all kinds of traffic; a confederate spy would hardly stand out. That’s the way Admiral DeWynter reasoned when she sent her only son to Synoor, to evaluate the world’s economic potential—and to spy on Regent Banoran. The moment Daniel DeWynter’s foot touches the dusty landing strip on the edge of the jungle, he feels he’s walked into a trap.

Days later, the rumors of invasion take on an ominous cast. As a soldier he could deal with the treacherous regent and his buddies, the pirates of New Hebrides. But he can’t deal with the possibility of losing the one person who is the star of his life—his wife who walks beside him, unaware that they may well be heading for execution.