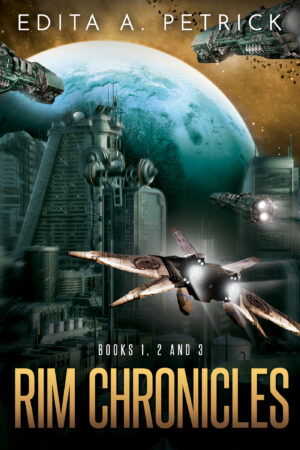 Ahrun Dyem is the beautiful and passionate native leader of the Hettamir.  Determined to free her people from slavery to the tourist industry that drives the economic tides of her world, Ahrun is proud to have brokered their first treaty with the federation.  She’s not blind to the factions working to destroy the alliance between Hettamir and the Confederation, but how can she ever imagine that one act of kindness will spark a cataclysmic event and forever change the destiny of every world in the Confederation?

Is magic in the jungle real or lore…?

A young envoy and his wife, are sent to a distant Rimworld to re-establish commercial and cultural ties with the man the Allied Confederation had appointed as the planetary Regent. The frontier world is a gateway to the new galactic horizons still left to explore. It has enormous developmental potential. It has unbelievable lore and legends about jungle magic that are unlike any in the galaxy. And its Regent is a scheming, treacherous viper who is poised to ‘hand over’ the world to his buddies—the pirates and mercenaries from the neighboring New Hebrides. With the invasion imminent, it’s the worst possible time for the envoy and his wife to find out that they are to become parents—and are stuck on a world that’s about to be decimated by pirates.

The distant future looks promising…and menacing at the same time.

The humanity hasn’t really spread through the galaxy. It was always there, waiting to grow and stretch its technological tendrils into a collective. The ultimate goals was to connect with its many star-clans through alliances—and common enemies.

The Rimworlds are the distant coveted frontier—raw and unexplored. When the Allies establish a Regency on Synoor, a charming frontier world that’s strategically positioned between their mortal enemies, the Shoultain Warlords, and the privateer strongholds in New Hebrides, they believe they’ve gained a huge advantage in the deadly game of galactic expansion. Two decades later, the world is attacked by pirates. Its solitary Allied settlement is razed to the ground. No one is thought to have survived; certainly not the young envoy, the son of the fleet admiral and his wife who were sent to Synoor to confirm rumors of Shoultain collaboration…and determine whether it’s just local lore or whether there’s more to the rumors that there is “magic in the jungle.”

But someone did survive the horrific massacre, though it’s not anyone who should be allowed to leave the world.