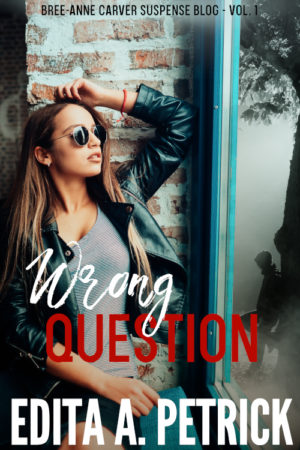 Bree-Ann Carver is an over-achieving young graduate of Columbia University who fully expected to win the prestigious post-grad fellowship with the New York Times. When she is offered a consolation prize—an internship in a subsidiary’s satellite office, in rural Idaho, she wants to turn her back on the lying cheats and knows it’s the last thing she can afford. There are mountains of student loans to pay and defaulting on them is not an option for an ambitious young woman just starting out on her own. Her job assignment is to write a weekly blog post and have a million subscribers by the end of her contract. It’s the least the Times expects from an intern, even if she is in a place that barely has GPS coordinates. A casual remark defines her choice for the blog topic: A fictional murder scenario with a subsequent revelation of the motive and murderer. She calls her blog “C-Murder of the Week.”

However, when her first subscriber not only criticizes her efforts but aggressively moves to take over her blog via his unsolicited input into her work, she is no longer sure she made the right choice. She invites him to unsubscribe and finds that she has no control over this particular cyber-subscriber. He follows her to her private chatroom, he hacks her colleagues’ email accounts and he terrorizes her through her desktop and her laptop. She knows he wants her to use his murder scenarios, but these sound like real-case murders that the police closed as accidents. If she posts even one of these dangerous scenarios, she is exposing herself to not only the real killer’s wrath, but the police who closed the case as accidental death. She refuses, out of self-preservation and each time she does, her cyber bully sends her a chilling one liner: There will be consequences. And there are…except Bree-Ann is not the one who suffers them. The stalker has chosen those she cares about as targets for his rage.